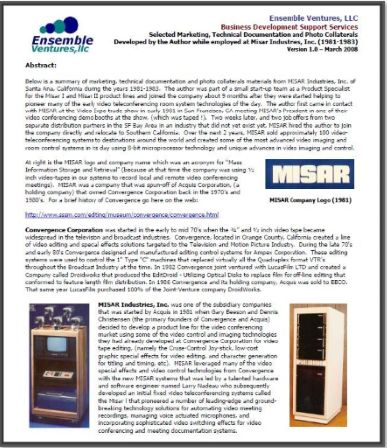 At the right is a PDF File summary of the marketing, technical documentation and photo collaterals materials from MISAR Industries, Inc. of Santa Ana, California during the years 1981-1983.  The author (Mike Schmidt, CEO of Ensemble Ventures, LLC today) was part of a small start-up team as a Product Specialist for the Misar I and Misar II product lines and joined the company about 9 months after they were started helping to pioneer many of the early video teleconferencing room system technologies of the day.  This was the author's first true "start-up experience".  Note: You can click to open into another browser tab, or right-click to download...

The author first came in contact with MISAR at the Video Expo trade show in early 1981 in San Francisco, CA meeting MISAR’s President in one of their video conferencing demo booths at the show, (which was videottaped !). Two weeks later, and two job offers from two separate distribution partners in the SF Bay Area in an industry that did not yet exist yet, MISAR hired the author to join the company directly and relocate to Southern California. Over the next 2 years, MISAR sold approximately 100 videoteleconferencing systems to destinations around the world and created some of the most advanced video imaging and room control systems in its day using 8-bit microprocessor technology and unique advances in video imaging and control.

The MISAR-II was one of the most sophisticated, automated, audio and video systems of its kind in the world at the time, (using current technology), and had a stellar team of electronic and systems engineers from Industrial Light and Magic, and Convergence Corporation, as well as E/M designers from Intel, (as I had just left a position with Intel's New Fab Engineering Group in 1981 to join MISAR)  and proven marketing and sales professionals from a wide variety of communications and broadcast start-ups in the 70s.

MISAR was an acronym for “Mass Information Storage and Retrieval” (because at that time the company was using ½ inch video-tapes in our systems to record local and remote video conferencing meetings). MISAR was a company that was spun-off of Acquis Corporation, (a holding company) that owned Convergence Corporation back in the 1970’s and 1980’s.

Convergence Corporation was started in the early to mid 70’s when the ¾” and ½ inch video tape became widespread in the television and broadcast industries. Convergence, located in Orange County, California created a line of video editing and special effects solutions targeted to the Television and Motion Picture Industry. During the late 70's and early 80's Convergence designed and manufactured editing control systems for Ampex Corporation. These editing systems were used to control the 1" Type "C" machines that replaced virtually all the Quadraplex format VTR's throughout the Broadcast Industry at the time.

In 1982 Convergence joint ventured with LucasFilm LTD and created a Company called Droidworks that produced the EditDroid - Utilizing Optical Disks to replace film for off-line editing that conformed to feature length film distribution. In 1986 Convergence and its holding company, Acquis was sold to EECO.  That same year LucasFilm purchased 100% of the Joint-Venture company DroidWorks.

MISAR Industries, Inc. was one of the subsidiary companies that was started by Acquis in 1981 when Gary Beeson and Dennis Christensen (the primary founders of Convergence and Acquis) decided to develop a product line for the video conferencing market using some of the video control and imaging technologies they had already developed at Convergence Corporation for video tape editing, (namely the Cruse-Control Joy-stick, low-cost graphic special effects for video editing, and character generation for titling and timing, etc).

The MISAR I System:

MISAR leveraged many of the video special effects and video control technologies from Convergence with the new MISAR systems that was led by a group of talented hardware and software engineers from Convergence who subsequently developed an initial fixed video teleconferencing systems called the MISAR l that pioneered a number of leading-edge and groundbreaking technology solutions for automating video meeting recordings, managing voice actuated microphones, and incorporating sophisticated video switching effects for video conferencing and meeting documentation systems.  The MISAR I was a 5-camera black and white and color system that was based on technologies from Convergence Corporation.  MISAR however Created two video teleconferencing products; the MISAR l System and the Misar ll, (a completely automated robotically controlled audio and video imaging system) that had just two cameras that could completely automate all the room audio and video functions of a corporate video conference.

When MISAR embarked on the development of their second generation system, the Misar ll they based this new design on a unique imaging technology that was originally developed at LucasFilm for Star Wars, (namely the inverted camera and robotic mirroring systems that were used on model sets and against blue screens for many of the special effects used in the film). One of the young engineers, (Mike Pettus) who had worked on these solutions at LucasFilm was hired by Acquis to head up the engineering of the advanced Misar ll systems to add to the existing Misar l product line to create a large fixed-room video imaging and control system that would completely automate video conferencing meetings and require no-operators what so ever to operate. It was the first system of its kind in the world and the most sophisticated blending of robotics technology with video imaging targeted for the corporate marketplace.

During MISAR’s development our technology was documented as one of the most sophisticated video imaging and control systems that was developed at that time, and our video conferencing solutions were highlighted in a 1983 book by Rudy Bretz, entitled, “Media for Interactive Communications”.

Mr. Bretz was a noted television and instructional educational consultant and pioneer of many educational television networks in the US in the 1980’s and an ex Rand Corporation researcher and past president of the National Educational Sciences Corporation.   At left is a sampling of some of the sections from his book with some of the author's drawings that highlighted the Misar ll as, “the most sophisticated development of automated TV production in the video field”. 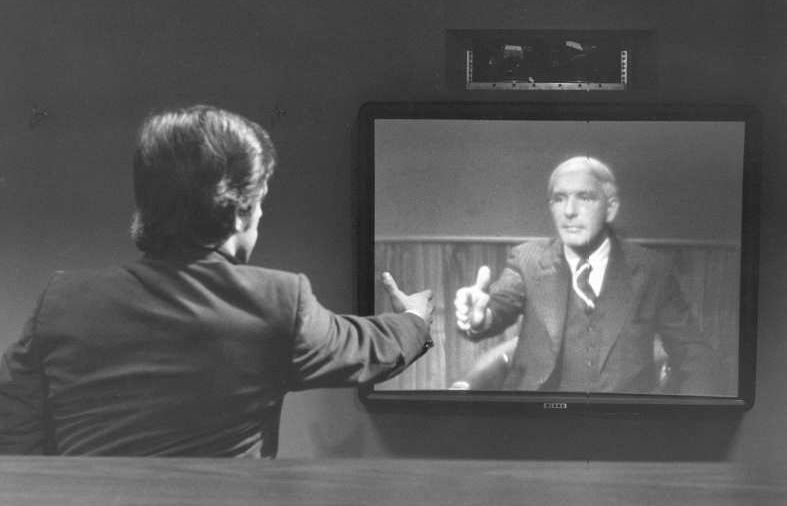 We also had published in the book our famous “Virtual Handshake” picture that was used to promote our Misar ll system, (below right) which was a back-ofthe- head shot of the author shaking hands with a remote person in the video conference demonstrating life-like eye-contact with remote participants.